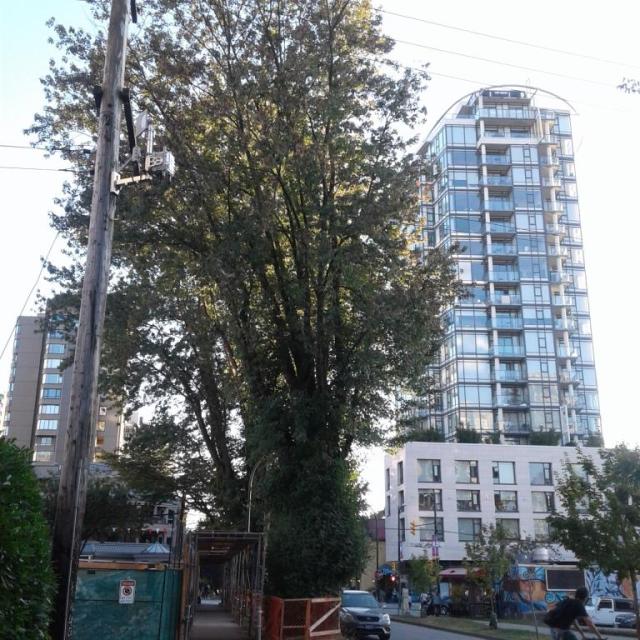 7-storey maple on Bidwell was to be retained, but is now slated for removal. Why?

(Updated Sept 8, 2017. The original text below was posted on August 18, 2017. The tree was standing today, but the City has decided to let the developer cut it down.  See “Outcome: 7-storey maple to be cut down at Bidwell & Davie for Reliance tower project” dated Sept 8.)

A West End resident contacted WEN last night to give a heads up that a significant tree is scheduled for removal at 1188 Bidwell Street. This is connected with the construction of a 22-storey tower by Reliance Properties (CEO Jon Stovell).

Further investigation by West End Neighbours has found that retention of this and other trees near the site was an explicit condition by the City of Vancouver for approval of the Development Application (DE419087). See below for our findings.

It would seem inappropriate that the contractor is posting a notice of removal of this tree. If the City was considering back-tracking on its original position, there should be a public notification of this — from the City. It will disturb some residents to hear that this tree was officially shown for retention, but is now to be “removed and replaced.” The tree canopy in the West End is precious and should be preserved where possible.

We will report back if we hear more information, but this situation raises questions. Why did the City require tree retention and the developer agree to it? What has changed to now allow Reliance to remove the trees? Has due process been followed? Would planting of a young tree in the future really “replace” what risks being lost here? And on a larger scale what is the precedent and message here? Can explicit conditions for City approval of a major development application by a prominent developer be ignored or quietly reversed with the stroke of a pen, in a city that claims to protect its green cover and be the world’s “greenest city” by 2020?

Shops on the site have been closed for some time and demolitions are under way (the Mac’s store on the corner was recently demolished; meanwhile, Safeway and the BC Liquor Store on the same block are slated to close this month for a separate two-tower development. The entire block will be demolished.). 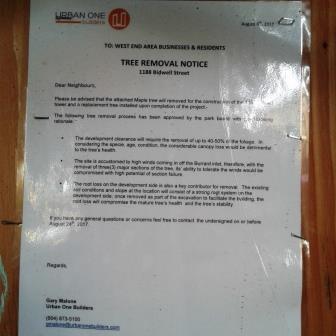 Letter from Urban One Builders (see bottom of this post for exact text).

A letter (right) from Urban One Builders has been posted nearby, saying that the maple tree will be removed soon and replaced at the end of the project, that the Park Board has approved already.

In cases like these, citizens can search for development application documentation and staff reports with specific references to trees being retained.

Unfortunately (as is often the case), the City has completely removed the project information (DE419087) from the official Development Applications web page:  http://development.vancouver.ca/

But the staff report to the Development Permit Board (which approved the project on September 8, 2015, under then Chief Planner Brian Jackson) is still available here:

Page 35 of the PDF document shows the trees on Bidwell, including the subject tree, as do the landscape plans on pages 43, 45, 46.

Page 17 of the report notes as part of the Public Notification section:

Street Trees on Bidwell: One respondent requested that the existing trees along the Bidwell frontage be retained.
Staff Response: The application includes protection of the street trees on both sides.

A.1.16 delete any notes regarding removal of street trees;
Note to Applicant: Per drawings, all trees on Bidwell Street and Davie Street are to be
retained. 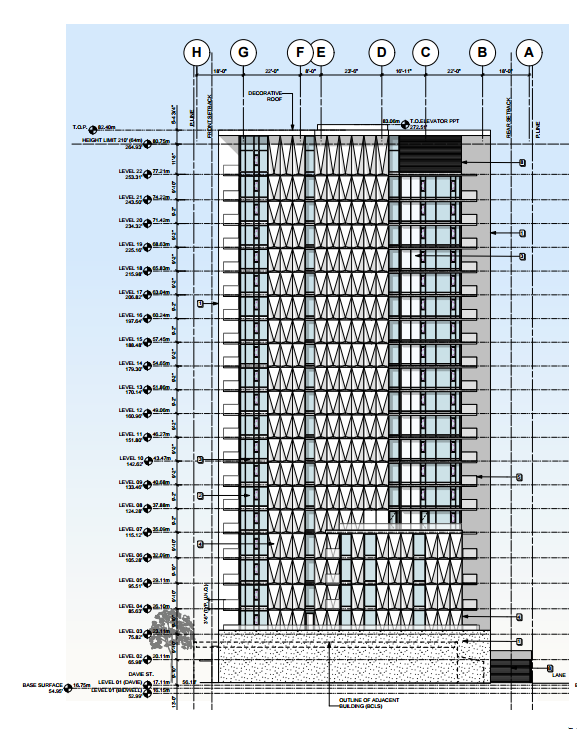 The following tree removal process has been approved by the park board with the following rationale:

The development clearance will require the removal of up to 40-50% of the foliage. In considering the species, age, condition, the considerable canopy loss would be detrimental to the tree’s health.

The site is accustomed to high winds coming in off the Burrard inlet, therefore, with the removal of three (3) major sections of the tree, its ability to tolerate the winds would be compromised with high potential of section failure.

If you have any general questions or concerns feel free to contact the undersigned on or before August 24th, 2017.

Public input was limited to a questionnaire at the open house (June 29, 2015) and an opportunity to write and/or speak to the DPB in September that year. Several shops that were at the north-east corner of Bidwell and Davie are closed and will be demolished (Mac’s, Enchante Hair Salon, Bosley’s Pet Foods, and Vivien’s Fashions), as well as older affordable rental buildings.