Here is another proposed tower development enabled by the West End Community Plan (2013) and Rezoning Policy for the West End.

Prima Properties (privately held developer, no website) has submitted a rezoning application for a 47-storey tower 1157 Burrard Street, the site that was formerly a gas station at the northwest corner of Burrard and Davie Streets.

West End Neighbours has carried stories about this site a number of times since 2010, including the discussion on “Implementation of ‘Vancouver Views’ and Opportunities for Higher Buildings in the Downtown” under Vision Vancouver to permit tall towers at this important entrance to the West End. (See links below.)

The 21,605 square foot site was designated for rezoning in January 2014 under the West End Community Plan, approved in November 2013 by the Vision Vancouver dominated City Council. It is currently zoned DD (Downtown District) and C-5 (Commercial).

The full application can be viewed here: https://rezoning.vancouver.ca/applications/1157burrard/index.htm

A community open house will be held as follows:

The project also goes to the Urban Design Panel (advisory to City Council):

Among other things, WEN will be interested in learning what benefits are being proposed for the West End community as a result of this proposal. How much will be paid in CACs and DCLs to benefit the West End?  After the original gas station closed, this site has been used as a community garden for years, saving Prima hundreds of thousands of dollars in property taxes under the BC Assessment taxation rules. (The taxes saved by Prima are shifted to the tax burden of other businesses and taxpayers.) Many developers use this loophole to save on taxes while they wait years to develop their property.

The proposal for a 47-storey mixed-use tower includes:

The architect for the project is Merrick Architecture.

Further below is some coverage related to this site by West End Neighbours going back to 2010 (oldest to newest), showing how the City modified height restrictions on this and other sites downtown.

In the public consultation other areas to look at include the relaxations being requested by Prima Properties.

For example, here is an excerpt from the “1157 Burrard Rezoning Rationale Statement”:

“Height supported under ‘DD’ Zoning is 91.4m/299.9’, conditional up to 137.2m/450’. The 480’ height (plus amenity/architectural screening) proposed exceeds the conditional height by 30’. While the West End Community Plan anticipated building heights of up to 375’, the General Policy for Higher Buildings does not specifically mandate a maximum height for the site. The Higher Buildings Policy anticipates that a project on the site will extend into View Cone 3.2.1 from Queen Elizabeth Park, enhancing the overall City skyline and providing significant Public Benefits in return.”

The public and City Council needs to have a close look at what the developer is asking for in relation to what the City and community get in return. When the “outright” height was rezoned to 91.4 meters did the City get anything in return for the windfall profit from land lift?  What must the proponent do to “earn” the conditional maximum height of 137.2 meters? The West End Community Plan “anticipated building heights up to 375 feet.” What does the developer profit and what does the community get in return for the height going more than a hundred feet above that?

“Floor Area supported under ‘DD’ Zoning is 6.0 FSR (x the site area) with a capacity to increase this by 10% (6.6) with an offsite Heritage Density purchase.” Where is that offsite density coming from? 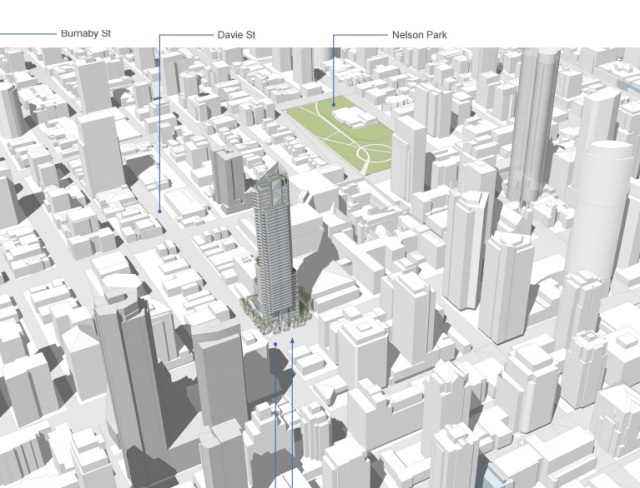 Posted on January 31, 2011
On January 27, 2011,West End Neighbours wrote Mayor Robertson & Councillors to oppose passing the recommendations in the report on “Vancouver Views” and Opportunities for Higher Buildings in the Downtown. WEN is opposed to the suggested increases in allowable building …

Posted on January 19, 2011
The reports before council are: Implementation of “Vancouver Views” and Opportunities for Higher Buildings in the Downtown (supplemental memo, and previous staff presentation on December 16, 2011). These are videos from a public presentation by city staff on Monday: Moderator’s …

Posted on January 16, 2011
In response to many questions from the public about the proposals before City Council this Thursday to increase the heights of towers in the downtown and West End borders, the city staff will hold an information session: Monday, January 17, …

To be or not to be in the West End. That is the question.

Posted on January 4, 2011
Happy New Year everyone! Welcome to 2011 in which we see a renewed sense of accomplishment paired with the excitement of what is possible for the community. We hope you all had a wonderful time surrounded by loved ones, friends, …

The relationship between Vancouver’s city skyline and its picturesque mountain setting is the “signature” of Vancouver.  Changes to our city that affect our views and our skyline must be handled carefully. Any discussions about preserving these views should not be complicated …

It’s Davie Village, not Davie City
Posted on December 16, 2010
We have heard from many of you who were stunned to find out about the Implementation of “Vancouver Views” and Opportunities for Higher Buildings in the Downtown policy report.

Vancouver’s Height, Density and View Give Away to Developers, a Holiday Gift?

Posted on December 13, 2010
***UPDATE TO BELOW*** December 14, 2010 Council has moved to push down the date when they will hear from the public regarding the policy: Implementation of “Vancouver Views” and Opportunities for Higher Buildings in the Downtown, from this Thursday December …