Comments from West End residents: Since 2010, West End Neighbours has been engaged in some key issues affecting the neighbourhood. Here are comments received from long-time resident Diane, with a response by Gracia, who asks many questions. It will be interesting to revisit these questions again in the future. 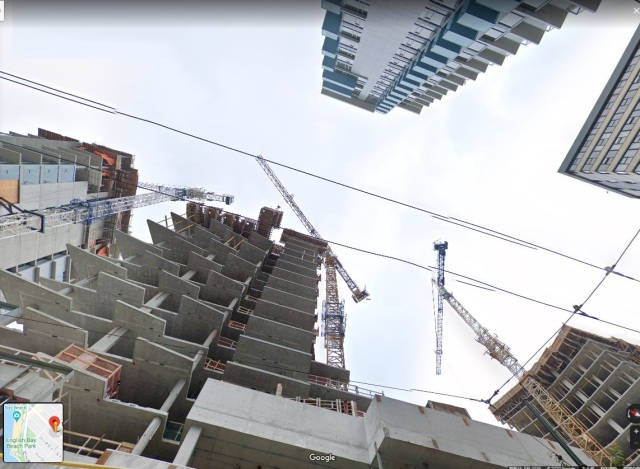 Diane: I walked around the block yesterday (end of Feb 2020). That block along with the tower next to London Drugs across the street [1670 Davie] is astonishing. In the case of the north side of the street the only separation between huge towers is the laneway.

Panorama from about 12th floor at 1670 Davie Street. To the left is westward and to the right is eastward along Davie. Photo: WEN.

Gracia: Will smaller businesses located on the lower floors of these new Davie Street towers struggle for a few years to pay the higher property taxes related to past land speculation that occurred with unacknowledged “blessings” of politicians from one municipal party [now defunct Vision Vancouver] and two provincial parties?

Golden Choice Produce on Davie was sold in the late autumn (the previous owner used to live in the Brentwood area of Burnaby). A middle eastern family purchased the business and by February, the produce part of the store was closed. At present, by looking in the windows, it is difficult to know if the store will close or change to a general grocery store selling mainly canned or packaged goods.

If condominium insurance premiums are increasing in newer buildings with Airbnb units considered as a high risk item, and the coronavirus situation brings on a widespread economic recession, in densified parts of Davie street (where “packed in” neighbours can talk to each other from their bedroom and living room windows), who will be purchasing units on the higher floors? How much higher will rents be on the lower floors compared to amounts quoted in past City of Vancouver staff reports?

Residents who did their shopping between Bidwell and Cardero are now used to buying groceries in shops located in less expensive parts of the West End. When a large supermarket moves back to Davie and Cardero [the former Safeway site, where two towers are now going up by Westbank Projects Corp (CEO Ian Gillespie) and architect Henriquez Partners Architects], will there be a customer base to support other businesses located in the new towers?

With the densification changes on Davie Street, are small business owners in the heart of Davie Village “pushing” for more green sitting spaces a way to keep new customers shopping in a less expensive part of the West End (although, removing bus stops to build new sitting spaces could be a problem because older residents use buses to shop in different parts of the West End)? (Reference: https://www.straight.com/news/1362011/west-end-seniors-network-opposes-removal-davie-street-bus-stop-new-vancouver-parklet)

Are the new owners of Golden Choice trying to survive financially until a large supermarket with “deep pockets” moves into Mr. Gillespie’s “creation” at the corner of Davie and Cardero?